At the beginning of the 20th century, the only place of worship for Calvinists in Szeged was the Calvin Square church, dedicated in 1884, while the number of churchgoers had risen sharply, since the staff of the university moved here from Kolozsvár after the Treaty of Versailles, the refugees from Bánát and Transylvania, and the students here were predominantly Calvinists. Therefore, the presbytery of the Calvin Square church decided to build a new church in 1928. Due to poor economic conditions, this was realized only in 1940, with a generous donation (1000 Hungarian pengő) from Governor Miklós Horthy. The area was provided free of charge by the city council of Szeged. Construction began on September 8, 1941, and the cornerstone, located under the stairs of the main gate, was laid on October 26. The church was finished by the summer of 1944. Due to financial problems and the puritan aesthetics of Protestantism, the roofing was done with simple clay tiles and the walls were covered by bare bricks. The first worship was held on November 30, 1947. Both bells, finished by Easter Monday, 1948, were made by Ráfael Szlezák. The church was dedicated on December 26, 1949, and the pews were done by 1958. The modernist design is defined by the bare brick frontage, while the main motif of the building is the mosaic lamb, carrying a flag, located in a triangle above the main entrance. The clock on the tower consists of white, lit-up rectangles, and is surrounded by a bell house with inwrought openings. The 41-meter-high tower is crowned by a bronze mace. The pentagonal main hall, which is able to host up to 500 worshippers, is notable due to its reinforced concrete dome. The church also has an office and a rectory. A 300-seat community hall can also be found on the semi-basement level, with a stage for performances and a community kitchen. The self-declared intention of the church’s architect, József Boros, was to build a place of worship that matches the Votive Church in design and contributes to an organic cityscape. 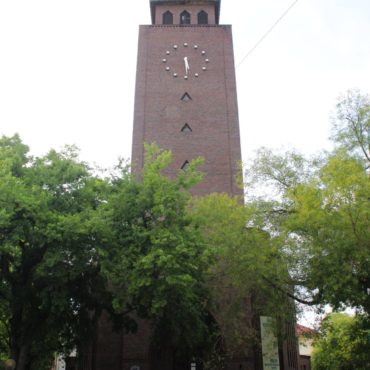 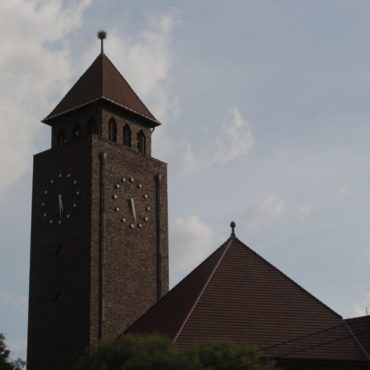 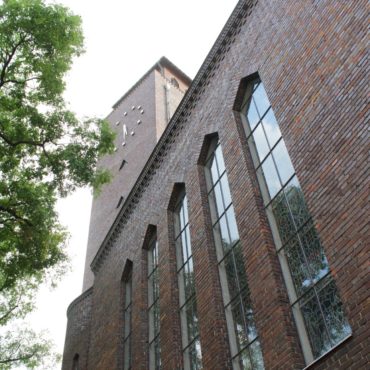 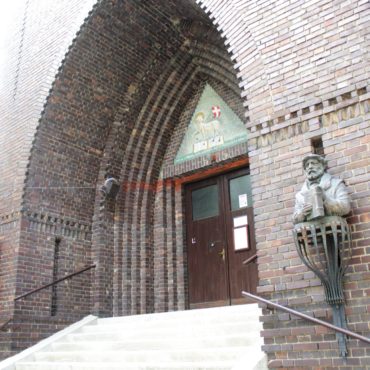